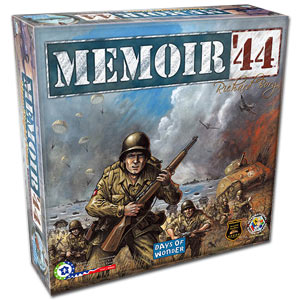 From the opening minutes of D-Day to the liberation of Paris and beyond - Memoir 44 airdrops you into the key battles that turned the tide in Western Europe. Omaha Beach, Pegasus Bridge, Ardennes... You'll command your troops in battlefields that defined history in the 20th century.

Memoir 44 is a unique historical game where players face-off in over a dozen WWII battles on an overzize hex game board. Each battle scenario mimics the historical terrain, troop placements and objectives of each army. Deploying his forces through a variety of Command and Tactic cards, the smart commander uses the unique skills of his units - infantry, paratrooper, tank, artillery, and even resistance fighters - to its greatest strenght. Easy to learn and fast-paced, Memoir 44 requires strategic card play, timely dice rolling and an aggressive, yet flexible battle plan to achieve victory.

Dark Souls: The Board Game