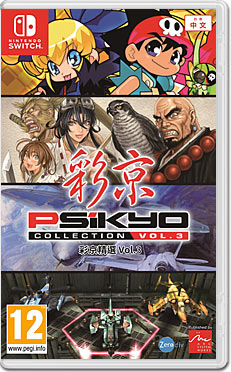 A revolution broke out in shooting games in 1995. The Japanese brand "Psikyo" introduced a new enemy's attack, "Spread bullets" not seen before then, and the history of a new shooting game began.

If you are a shooting game fan, "Psikyo shooting" that everyone knows is revived! Shoot!

Two years have passed since the settling of the soul hunting incident in which human souls were transplanted into mechanical bodies. As people were gradually recovering from the pain sustained, a new incident took place. One day, the puppet soldiers who should have disappeared, the fortress suddenly appears again. In order to unravel the truth behind the whole incident, a group of people took upon themselves to embrace the Hisouseki…

Gunbarich launched in arcade version in 2001. It is a new game with elements of puzzle and shooting in the late works of Japanese brand "Psikyo". In Japan's amusement arcade, there is always one popular game.

Famous for its cool world and innovatively omnidirectional shooting system, Zero Gunner 2, is coming back as Zero Gunner 2-.

Let's blast off every enemy's planes from various sides of your screen.

The compilation of Psikyo shooting game, Zero Gunner, is now on release!!

Crypt of the NecroDancer

Narcos: Rise of the Cartels

NEO: The World Ends With You

Plants vs. Zombies: Battle for...