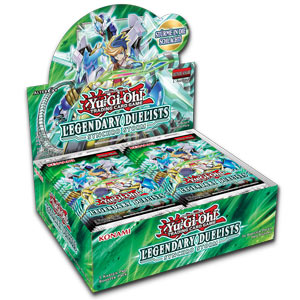 The winds of victory are swift and sure! Legendary Duelists: Synchro Storm powers up three strategies used by Duelists that specialize in WIND monsters!

First appearing in Yu-Gi-Oh! ARC-V, Yugo's "Speedroid" monsters excel at quick, consecutive Synchro Summons! Start off with Summoning his signature monster, Clear Wing Synchro Dragon, then use the rest of your Speedroids to upgrade it into more advanced forms like Crystal Wing Synchro Dragon or even a brand-new WIND Synchro Dragon!

Finally, take a left turn into the Xyz Dimension and you'll find new cards for Lulu's Lyrilusc strategy from Yu-Gi-Oh! ARC-V. This strategy stacks up Level 1 Winged Beasts to Xyz Summon Rank 1 Xyz Monsters with as many Xyz Materials as possible. You can even combine them with "Tri-Brigade" cards from Phantom Rage, Blazing Vortex, and Lightning Overdrive to create a cool hybrid strategy!

Topping it all off, Legendary Duelists: Synchro Storm will include a hard-to-find Ghost Rare version of one of its coolest cards!

Yu-Gi-Oh! Ghosts From the Past Box...